Braid Behind the Scenes


[This article originally appeared on Game Design Aspect under the topics of Prototyping and Indie Game Revelations.]

Speaking to a packed audience at the 2019 Taipei Game Developers Forum last Wednesday, July 10, 2019, independent game developer Jonathan Blow detailed a three-year struggle against naysayers during the development of his game, Braid. The 2008 runaway indie hit, considered by many to be a masterpiece, obviously defied its critics when it sold 55,000 units in its first week on XBox Live Arcade and earned Blow more than 4 million dollars in revenue. 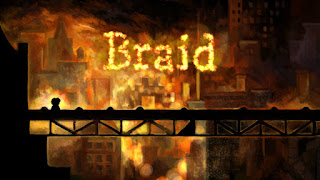 Blow took the audience back to the very beginning with his Super Rough Draft Version, a bare-bones prototype featuring programmer art made in Paint. Despite the simplicity, this early playable level encapsulated the design principles he intended for the game. He had been thinking about the Rewind ability, in which a player is able to rewind prior actions  This had been implemented in previous games like Prince of Persia: The Sands of Time so that players could rewind and fix mistakes, but hadn't been groundbreaking. Blow wondered how a game would change if a player had unlimited Rewind and did not have to worry about dying.

Moreover, all the puzzles in his game would be tied to this Rewind ability.  It would be about realizing mistakes, seeing the puzzle differently, and taking a different approach.  Because this was an untested concept, he wanted the game genre to be one that was simple and familiar so that when things got weird, players would not get confused.  He chose to do a platformer.

Finally, he was purposefully aiming for a game with "artistic attitude," even though at the time, it was controversial to consider games as art. Film critic Roger Ebert would famously say that video games can never be art. Blow explained that because there was no concept of art games or a big enough indie game community, it was very hard for him to recruit an artist to work on his game.  He would send prospective artists his demo and get shot down.

He read segments of an e-mail from one such artist who gave lots of unsolicited advice on how to make the game better because "the video game industry is very unforgiving." Blow speculated that the artist thought he was a confused newbie who didn't know anything about game design. The Independent Games Festival (IGF) judges in 2006 thought otherwise. Braid won Innovation in Game Design.

Encouraged by this development, Blow resubmitted Braid to IGF the following year, hoping to win a grander prize, but it didn't even become a Finalist.

Steam, which in 2007 was a heavily curated storefront, would be another dead end.  Steam projected that the game would sell less than 5000 copies and rejected the game. Blow even tried a back channel to Valve, which did not succeed.

Still, despite all the negativity from outside sources, Blow's friends maintained that Braid was something special and that they really liked it.

Blow persisted and got the attention of someone at XBox Live but even then, Braid was almost canceled twice by Microsoft and his art outsourcing company lost interest in the game.

Thinking back, Blow wondered why people, especially people paid to find future hits, didn't see Braid's potential.  He concluded that it's really hard for people to look at a work-in-progress and see its finished form.  Because of this, a lot of times, feedback will be wrong or at least conservative.  Therefore, it's vital that a game creator be able to communicate the future vision to team members and others.

In 2008, Braid won numerous awards, including XBox Live Arcade Game of the Year, and a decade later. is considered a transformative work that changed the market landscape by proving that independent games could be financially successful.

Sande Chen is a writer and game designer whose work has spanned 15 years in the industry. Her credits include 1999 IGF winner Terminus, 2007 PC RPG of the Year The Witcher, and Wizard 101. She is one of the founding members of the IGDA Game Design SIG.